This year we made two trips back to the UK in April and June.

The first was for Andy to run the London Marathon and allowed Gill to go to my niece Maddie’s fifth birthday party as an added bonus. The race was an amazing experience, but he was disappointed with his time having been injured and the difficulties of having done his training in Laos in the hot season. It was a great atmosphere in the London and the race has amazing support along the entire route – London is simply one of the great cities in the world. Our friends Aimee and Steve came down to watch the finish, and Andy’s parents also came. We stayed an extra night in London and took the chance to visit and Victoria and Albert Museum and have a night out in the big city. We do love London and would be happy to spend more time there. We then took a trip to Wales to visit Kez, Dave and their kids for a couple of days. It was a great visit in the beautiful countryside, and we had a fantastic time walking, eating, drinking, and catching up.

June was the month of important birthdays, with Gill’s 40th and dad’s 70th. Andy’s mum shares the same birthday as Gill, so he spent the weekend with her and then came up to Scotland. Much champagne was drunk and good things eaten and we also had a very nice trip to the zoo with Maddie, and to the the Royal Botanic Garden Edinburgh with mum and dad. 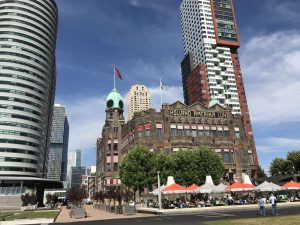 Then it was time to head off to the Netherlands to meet with friends and help Sarah celebrate her 40th. We spent a night in Rotterdam and caught up with Carola, Karen and Michael over cold beers in the sun. It was great to have a Bogor reunion! Karen, Michael and the two of us headed to the Best Kept Secret festival the next day, meeting up with Sarah Mc, Sarah, Sandra, Joss, and Chris. So wonderful to see everyone! The festival was great, with good food and beers. We were impressed by the zero waste beer glass system – pay one Euro for your glass at the start and exchange it for a new one every time you get a beer. The roving sellers with a beer backpack were also awesome. The musical highlights were Arcade Fire and Radiohead who both played amazing sets.

Soon it was time to head back to Vancouver and get on with moving back into our apartment, finally getting our stuff back after almost one year in storage!

Check out our Photos.