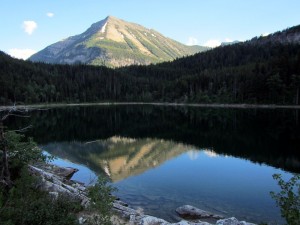 Our campsite at Crandall Lake

We headed down to Waterton Lakes for Canada Day long weekend. Last May it snowed on us at the village campsite, but this July 1st was fabulous.

We  base camped at Crandall Lake – this is a 2 km hike from the Red Rock Canyon road. With all the car accessible sites in the park being full, this was a great choice. Only one other tent camping at the lake on the first night (with only four tent allowed in total). A few more campers on the second and third nights, but nice and quiet campsite in a park that can get very busy.

On Canada Day we hiked the 2 km to the car and drove to Waterton to catch the shuttle bus up to the trailhead for Akamina Ridge (the road was closed to private vehicles for construction all year). 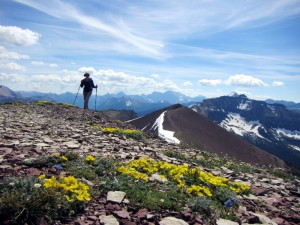 Gill arriving on another summit along Akamina Ridge

The Akamina Ridge hike starts with an easy trail up into British Columbia over the continental divide. Once in BC, we made the climb up to Forum Lake, and then climbed up to Akimina Ridge. This route is officially a scramble, since there are a few small rock ledges to clamber up. It was an easy climb (even for Gill) and once on the ridge the hike is spectacular.

The flowers along the ridge were fantastic. Lots of cushion saxifrage. The views into Glacier National Park in Montana were just great. As we climbed the third and final summit along the ridge we saw a mountain goat cooling off in a snowpack. It dropped down the steep cliffs after we disturbed it.

The drip down from the ridge to Wall Lake is easy. Wall Lake itself is a lively lake surrounded by the cliffs of Akamina Ridge.

At an easy pace the hike was 7 hours. Check out our Google Photos album! 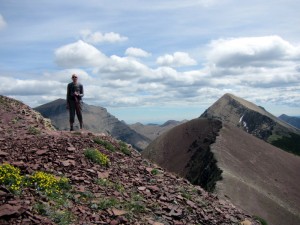 Andy on Lineham Ridge, with Mount Lineham in the background

Our second  shuttle bus day hike was Lineham Ridge, which begins with a lovely gentle climb up the Rowe Creek valley. A great start with lovely mature forest, open meadows, which culminates in a green meadow surrounded by the towering cliffs and slopes of Lineham Ridge and Mount Rowe / Upper Row Lakes.

The with every step up the climb up to Lineham Ridge the view improves, eventually the Upper Rowe Lakes come into view, perched on the cliffs above the valley like an infinity pool. Crossing a few snow patches we made it up on the Lineham Ridge – wow! The view down to Lineham Lakes and along the ridge east to Mount Lineham is fantastic. We wondered whether to try climbing Mount Lineham – a faint trail heads along the ridge, but it looked like a serious scramble. Instead, we followed the classic Tamarack trail west along the Lineham Ridge. We disturbed a group of bighorn sheep munching on the fantastic display of wildflowers along the ridge. Eventually we summited the western high point of Lineham Ridge, which gives great views of Mount Lineham to the easy, Mount Blakiston to the north, and Akamina Ridge and the Montana Rockies to the south.

On the way down to the valley, we took the pleasant detour up to Upper Rowe Lakes, where the weather starts to close in and get quick blustery. We didn’t hang around and turn back down to follow the gentle trail back to the Akamina Parkway trailhead.

Check out our Google Photos album!