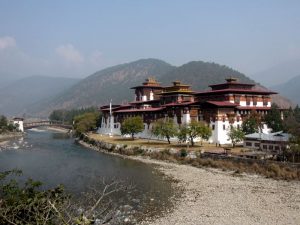 I was fortunate enough to be asked to join a one week mission to Bhutan related to climate change resilience planning.  Bhutan is vulnerable to a range of climate hazards including changing monsoon patterns, flash floods, landslides, water scarcity, and glacier retreat.

The flight into Paro Internationsl airport is an experience in itself.  Flying along the edge of the Himalayas, the landing approach involves turning north and banking left and right along a mountain valley before dropping onto the runway.  Superb in clear and calm weather.

The work was in the capital city Thimphu, which was chilly and dry in early February.  Despite a growing population and lots of new construction, the requirement to follow traditional architecture styles means the the city still has a lot of character.  The Sunday I arrived was the first birthday of Crown Prince Jigme Namgyel Wangchuck, which meant there were some special events including a music concert in the main “clock tower” square.

We met with several government ministries during the week.  I found time for one run on the nice outdoor running track near the river.  There are so many stray dogs in Thimphu that I would not fancy going for a run in the streets.  Even walking back to the hotel in the evening can be interesting.

After the work was complete, along with a couple of other people from the mission, I took the drive over the Dochula Pass to Punakha.  Unfortunately a forest fire meant it was too hazy to see the high Himalaya mountains from the pass.   Punakha Valley and Punakha Dzong (Fort) are fabulous.  A bonus is that it is much warmer in Punakha valley due to its elevation.

Inside Punakha Dzong it was great to see two monks welcoming the others into a ceremony by practicing what our guide told us was the “Black Hat” dance.

We then travelled up the valley for a short hike to the Khamsum Yulley Namgyal Temple. Crossing the river over a classic suspension footbridge, it’s a short 30-45 min hike up to the temple through some nice farmland and forest.

On the final day I travelled from Thimphu back to Paro and took a morning hike up to the famous Paro Taktsang, or Tiger’s Nest Monastery. I was feeling a little sick so felt really slow for the hike. Still we overtook a lot of of people. The hike and monastery is spectacular, and at this time of year it was relatively quiet. Afterwards I took a walk around Paro, which is located in a really lovely valley. I stayed at the historic old Gangtey Place Hotel a short walk from the town, on a small hill with great views.

I would love to come back to Bhutan and see some more of the country.

Check out the my Photo Gallery.